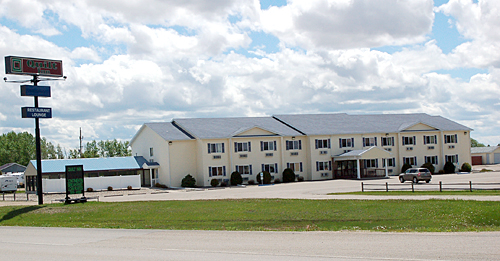 The Quilt Inn of Kenmare, opened in 2000 and sold May 21st to
new owners Jamie Livingston and Dick Ramsdell of Kenmare.

Ten years after the Quilt Inn opened in Kenmare, with 22 stockholders risking their money and their reputations on the venture, the motel has been sold to a local ownership group.

Jamie Livingston and Dick Ramsdell purchased the Quilt Inn for an undisclosed price in a transaction completed May 21st.

For , buying a business to run in Kenmare fulfills a long-held goal. The KHS graduate earned a degree in business management from the University of North Dakota in 1998. “In college, I thought I would own a business someday, but then I didn’t think about it much until this opportunity came along,” he said.

Most Kenmare residents know as an assistant vice-president at State Bank & Trust of Kenmare, where he has been working since May 1999. He and his wife Heather are the parents of Jacob, 4, and Brooke, age 1.

also served as the treasurer for the Quilt Inn stockholders group for eight years. “I took over when Ross Johnson left,” he said. “At the annual meetings, I would hear the stockholders say the purpose of doing this venture was that they felt the community needed another motel, but once it became profitable they wanted to get it into private hands.”

As handled the Quilt Inn’s revenues and expenses, he thought about becoming the motel’s owner himself. “I’ve been considering it for over a year,” he said, “and I approached Dick [Ramsdell] about it last fall.”

He and Ramsdell, who is a partner in RPM Consulting Inc. based in , made an offer on the motel in January to the board of directors and presented that offer to the stockholders in February. “The vote was unanimous,” said . “I think a lot of them were happy to see local ownership.”

Evidence of the stockholders’ wise decision to build the motel can be found in the business records. offered a conservative estimate that the 41 rooms are filled at 70 percent occupancy every night of the year. “That’s 10,500 rooms per year there, with those guests also spending money at the restaurants and gas stations in town,” he said.

He continued, “The real story here is the success of the stockholders and the vision they had. People thought they were crazy, that this town didn’t need two motels. They had a tough time convincing the people they asked to buy stock that this was going to work.”

He paused and smiled. “As you can see from the ‘No Vacancy’ signs, the Quilt Inn has had a positive impact on Kenmare,” he said.

The second factor in ’s decision to pursue ownership is the Quilt Inn staff itself. “As treasurer, I’d go up there every day and talk to the staff,” he said. “I feel the staff is a very big part of why it’s been such a successful business.”

“We’ll maintain the staff we have,” said . “In fact, we just added one staff member. It’s tough in the mornings to keep up with all the check-outs, and housekeeping can use some extra hands.”

Melgaard was pleased to see ownership of the motel transfer to Kenmare businessmen. “I’m really happy for them,” she said, “and I think they’re going to do great!”

Like , Melgaard recalled the initial resistance to the motel project. “But the stockholders were thinking this would be good for Kenmare,” she said, “and at that time [under the previous owners], the San Way Ve was not open some months.”

According to Melgaard, the change in policies at the border that came after the terrorist attacks of September 11, 2001, actually helped the Quilt Inn. “We had Border Patrol [personnel] here for two years,” she said, “and Customs agents and Immigration officers staying for a month or so at a time for the next two to three years.”

She continued, “Then it was oil and word of mouth and the Canadian travelers, and right now, it’s a little bit of all three. We have people come back time and time again.”

nodded as Melgaard talked, then added to her comments. “Our staff develops relationships with the people who stay here,” he said. “We get mail from people after they leave, who send a card to say how nice it was here. We may be a 41-unit motel, but it’s almost like a bed and breakfast.”

Another advantage for the Quilt Inn is its proximity to the South of the Border Sports Bar & Grill across the parking lot. “True, it’s not a family-style restaurant, but we feel South of the Border is a good complement to our business,” said . “They serve breakfast, lunch and supper and adult beverages, and have the pull-tabs, bingo and blackjack [for charitable gaming]. It’s a good draw for us and we feel we are good for them as well.”

As new owners, Livingston and Ramsdell do not plan any major renovations to the facility. “The previous ownership group did a good job keeping the property well-maintained and modern,” said .

Guests at the Quilt Inn will see some minor changes in the next few months, as flat screen TVs are installed in all the rooms. The patio has been fenced, and wants to add a grill and outdoor furniture for visitors’ use. Carpet in the second floor hallway and all guest rooms will also be replaced in the near future.

And will keep his office and position at the State Bank & Trust of Kenmare, taking his break every morning to visit staff members at the Quilt Inn like he’s been doing for the past eight years.

He just has more direct interests now, evident as he described the motel’s prospects. “There’s talk about building more motels in , but we feel we are the right distance from ,” he said, “and we get the overrun from . During their large events, like the State Fair and Hostfest, we’re always full. And it’s not all oil-related. A lot of commerce chooses to stay with us.”

He paused and smiled again. “I think we’ll be busy.”